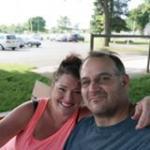 By Rollerman, December 29, 2007 in Implements and Attachments